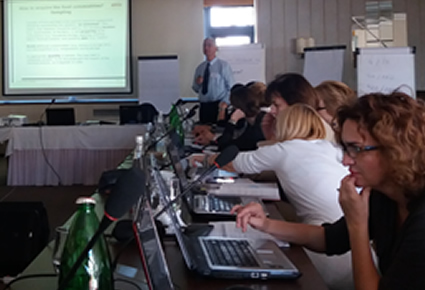 Under the contract no NP/EFSA/AFSCO/2017/01 “Training courses on certain aspects of food safety risk assessment for the experts from the Pre-accession countries”, AINIA has delivered two practical courses in food safety risk assessment for the European Food Safety Authority (EFSA) . The contract is the first action of AINIA for EFSA and reaffirms the technological center as a benchmark in food safety, while extending its experience at European and international level.

The contract execution has taken place from May to October, consisting in two courses delivered in Sarajevo (June 21 and 22) and Belgrade (October 26 and 27). In total, 51 experts from 7 different countries who aspire to join the European Union (Albania, Bosnia and Herzegovina, the former Yugoslav Republic of Macedonia, Montenegro, Serbia, Kosovo*[1] and Turkey) have attended eminently practical sessions that train them in subject of risk assessment for food safety.

The two courses, delivered by experts from different universities in Valencia, Córdoba and Madrid, as well as the competent authority in the Netherlands, have been coordinated by the AINIA Food Law Department, with a close collaboration between the project managers in EFSA and AINIA’s Management Training Center.

This  contract, being the first one that AINIA executed in the framework of Training for the European Food Safety Authority (EFSA), is a further step in the consolidation of AINIA as a reference in terms of food safety and extends its experience at European and international level.

In this regard, it should be noted that AINIA has been collaborating for more than ten years on the Better Training for Safer Food initiative (BTSF). Training initiative of the European Commission whose objective is the harmonisation of knowledge and practical application of EU regulations for the whole group of competent authorities, mainly among the EU Member countries.

[1] *This designation is without prejudice to positions on status, and is in line with UNSCR 1244/1999 and the ICJ Opinion on the Kosovo declaration of independence.